Why Are Left-Hand Turns So Dangerous?

Why Are Left-Hand Turns So Dangerous? 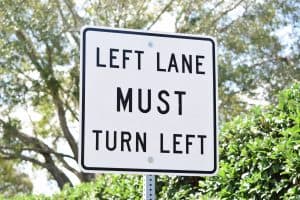 Drivers turning left generally do not have the right of way. In most car accident cases, the presumption is that the car turning left was the car responsible for the accident. Left-hand turns are dangerous for many reasons, such as:

Drivers turning left simply have to process more information than drivers turning right or going straight; it’s the reason why some states use formations like roundabouts (or circles), or “jug handles,” where a driver basically has to make a series of right-hand turns in order to go left. Many towns have installed left arrows in their lights, or designated turning lanes on roadways, in order to lower the risk of a collision.

Determining fault in a car crash involving a turn

The easiest assumption to make is that when Car A hits Car B, then the driver in Car A is responsible. The truth is, it’s not always that simple. Some of the possible reasons the cars, other than the one turning left, may be at fault are:

In cases like these, it’s critical that we prove the majority of fault lies with the other driver. So even if you struck another car while you were turning, you may still be entitled to compensation for your injuries.

Our Nashville car accident lawyers collect evidence to show how accidents happened, such as footage from traffic or other surveillance cameras, phone records, police reports, and/or eyewitnesses. We also inspect the cars. (The location of the damage is often an indicator of fault.) Finally, we review the accident scene to better understand what happened.

At the Rocky McElhaney Law Firm, our Gladiators in Suits work with the police and investigators to build a case for compensation for our clients. Our car accident lawyers understand why accidents happen and who’s responsible, and we won’t back down until we know you’re protected. We have offices in Nashville, Hendersonville, Knoxville, and work with clients across Tennessee. For help with your car accident case, please call us at 615-246-5549 or fill out our contact form to make an appointment. We handle injury cases on a contingency fee basis, meaning we don’t get paid until you get paid. Don’t settle for less. We fight for you!