A tractor-trailer cargo spill in Mt. Pleasant left a roadway significantly damaged in June after molten aluminum set the asphalt on fire. Luckily, the driver of the truck escaped unharmed and no other vehicles were involved. Just one short month later, another devastating crash miraculously ended with no loss of life. Truck accidents almost always end with serious injuries or fatalities; these near misses are rare enough to be worth sharing.

According to WBIR, “The Morristown Police Department says that Kathy Graves, 48, exited East Morris Boulevard and collided with a logging truck while merging onto 25 East Southbound just after 11 a.m. on Thursday. The impact caused the logs to shift and break the straps holding them in place, according to MPD. A portion of the logs then rolled on top of Graves’ Ford Mustang.”

Miraculously, Graves survived the collision; she was transported to UT Medical center with minor injuries and released a short time later. The WBIR report doesn’t quite capture the severity of the situation, but this picture from the scene of the crash is worth a thousand words: 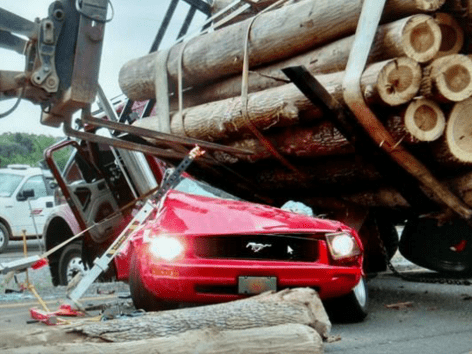 In an interview the day after the accident, Graves told WBIR, “I was in there, I was in there when the picture was taken. …Another inch, and I couldn’t have gotten any air.” The Rutledge resident ultimately spent less than 12 hours in the hospital after the terrifying wreck. Medical scans revealed no significant injuries, and she was released having suffered only minor cuts and bruises.

These accidents happen more often than we like to think, but they rarely have a happy ending. When commercial trucks are involved in an accident, their sheer size and mass make survival unlikely for passengers in small cars or trucks. In this particular case, the broken cargo straps and shifted load should have spelled disaster for Graves in her small sports car, but luck was on her side.

At the Rocky McElhaney Law Firm, we know how devastating commercial truck accidents can be. When your loved one suffers permanent injuries or is killed in a big rig wreck, your life changes forever. We have years of experience litigating complex commercial truck cases to help families get the compensation and closure they deserve. For a free consultation with an experienced Nashville commercial truck accident lawyer, visit our offices in Nashville, Gallatin, or Knoxville, call 615.246.5549 or contact us today.